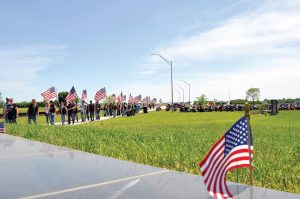 This is a half-scale replica of the Vietnam Veterans Memorial Wall. The 250-foot granite wall is engraved with the names of more than 58,000 fallen service members from the Vietnam War. It duplicates the original wall design in Washington, D.C., even using the same quarry in India for the granite. The panels were escorted to the park by the American Legion Riders in May 2014. This memorial brings the healing experience of one of our country’s most unique memorials to the Midwest, making it accessible for visitors from around the country who might not otherwise experience its powerful legacy.

Lewis and Clark and 10 men climbed a hill to the burial site of Blackbird, an Omaha Chief who died four years earlier of smallpox. Today, you can view a modern model of an earth lodge and enjoy the scenic beauty of the Missouri River. Site also contains information about the Omaha Tribe.

The City of Dakota City was awarded almost $130,000 for the renovation of the exterior of the former Chicago and Northwestern Railroad Depot. Constructed in 1922, this one-story brick depot building is eligible for listing in the National Register of Historic Places. This facility was a key link in the Omaha to Minneapolis rail corridor from 1922 until 1957 when it was abandoned. The rails and ties are still located immediately north of the building. It is located one block from the Dakota City Public School and 125 feet from the end of the Dakota City Trail.

Lewis and Clark’s Expedition went through this area their mood was gloomy after burying their comrade, Sergeant Charles Floyd, who died of a ruptured appendix. He was the expedition’s only fatality but they suffered from a variety of illnesses and accidents. On August 22, 1804, Captain Lewis became ill. On the return journey in 1806, Lewis was injured in a hunting accident. On this day, the explorers passed the Sioux River. Clark was told about a place high up this river where “a Creek Coms in which passes through cliffs of red rock which the Indians make pipes of, and when the different nations meet at those queries all is peace.” This is now known as Pipestone National Monument, located in southwestern Minnesota. The party camped along the Missouri River northeast of here.

The abandoned site of “Old St. John’s,” one of the first towns established in Dakota County. The townsite was settled on June 2, 1856, by the Father Trecy Colony – 60 people, with 18 ox-drawn covered wagons. The site was surveyed and platted June 24, 1856 and the town was named St. John’s, in honor of St. John the Baptist. In 1860, Father Trecy went to Washington seeking permission to establish a mission among the Ponca Indians. Meanwhile the Civil War began. Father Trecy became an Army chaplain and never returned to his beloved colony. In the early 1860s, the Missouri River began to threaten St. John’s. The people began moving their buildings to the new town of Jackson. By 1866, all buildings were gone and the townsite was abandoned.

Near here stands the first Lutheran church building constructed in Nebraska. It has occupied this site since 1860. The congregation was first served by Reverend Henry W. Kuhns, a missionary sent by the Allegheny Synod to Nebraska Territory. Kuhns preached his first sermon in the front room of the Bates House (hotel) in November 1850 and formally organized the church on July 22, 1859. The membership immediately made plans for building, but their effort of moving an abandoned store from the abandoned town of Pacific City was frustrated when the structure was destroyed by a prairie fire while being moved to Dakota City. This church was designed and built by Augustus T. Haase, a local carpenter and member of the Emmanuel Lutheran congregation, at a cost of $2,000. For several years the building also served periodically as a territorial courthouse, with religious services being held on Sunday as usual. Samuel Aughey, a leading scientist of the period, was the second pastor to serve the church. This old church still stands as a monument to the steadfastness of purpose of the early settler and as a symbol of pioneer religious life.

An important Omaha Indian village called Tonwantonga (Large Village) by the Omaha stood on Omaha Creek in this area. Ruled by the great Chief Blackbird, an estimated 1,100 people lived in this earthlodge town about 1795 and it played an important role in Indian and exploratory history. Many explorers and fur traders visited this spot before 1800. Near it the Spanish built a fort, armed it with heavy guns, and named it Fort Charles honoring Charles IV. The Lewis and Clark Expedition visited the village August 13, 1804, finding it deserted, as the Omaha were away on an extended buffalo hunt. The explorers stayed near the site for a week and held a conference with three chiefs of the Oto tribe who had come to make peace with the absent Omaha. In 1800, disaster had struck the village as smallpox killed an estimated 400 including the famous Chief Blackbird. After Blackbird’s death, the village ceased to play so important a role in the struggle for control of the Missouri Valley and the Plains beyond.